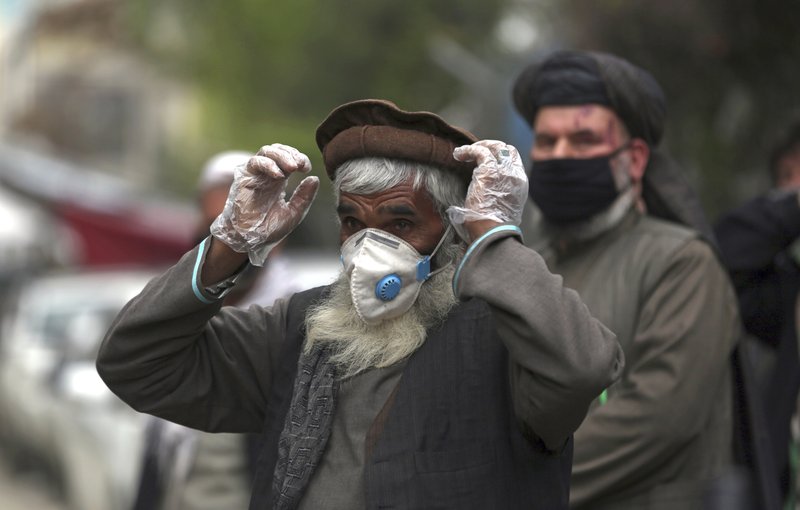 FILE – In this April 20, 2020, photo, daily-wage workers wear protective face mask to help curb the spread of the coronavirus in Kabul, Afghanistan. A prominent international aid organization warned Tuesday, June 2, 2020 that Afghanistan is on the brink of a humanitarian disaster because the government is unable to test at least 80% of possible coronavirus cases. (AP Photo/Rahmat Gul, File)

KABUL, Afghanistan (AP) — A prominent international aid organization warned Tuesday that Afghanistan is on the brink of a humanitarian disaster because the government is unable to test at least 80% of possible coronavirus cases.

The International Rescue Committee said COVID-19, the illness caused by the virus, is rapidly spreading undetected through Afghanistan. The IRC said the number of confirmed new cases rose by 684% in May, but the country’s extremely low testing capacity means many people are going untested.

Vicki Aken, Afghanistan country director at the IRC, told The Associated Press there are many concerns about the spread of the virus in Afghanistan, but the lack of testing is crucial.

We know that they’re clearing less than a thousand tests today each day,” she said. “But recent reports from the Ministry of Public Health had said that they were testing ten to twenty thousand people. I am concerned about the rate of people testing positive and of the health workers in particular.”

International health care professionals have warned that a large outbreak of the virus in Afghanistan could overwhelm its health care infrastructure, already wrecked by decades of war. Despite billions of dollars in international investment, much of it from the U.S., massive government corruption has left resources depleted, institutions dysfunctional, and the health care system ill-equipped to deal with even basic ailments.

Afghanistan’s Ministry of Health says it only has the capacity to test 2,000 people per day, but are receiving between 10,000 and 20,000 samples each day. That means up to 90% of potentially infected people are not being tested. And at 40%, Afghanistan has one of the highest rates of positive tests of all the countries where the IRC works, the organization said.

Aken said Afghanistan wasn’t prepared to respond to a health crisis of this magnitude.

“We want to do everything that we can to support them, particularly at the provincial level, which doesn’t get the resources that it needs,” she said.

Afghans have become increasingly poor, with 54% of the population earning less than $1.90 a day in 2019. That amount is likely less since the advent of the pandemic.

Officially, the country has about 16,400 confirmed coronavirus cases with more than 270 deaths.

“I think it’s definitely an under-reporting of what is going on, but it’s also their reporting on what their capacity is,” Aken said. “They can only report on the positive tests and they only have the ability to do so many tests.”

In the early weeks of the pandemic, many Afghans complained of being turned away when seeking tests at health facilities and many who were tested sad they were told their results were lost. It took weeks for health care staff to get enough protective gear, leaving them afraid to treat patients.

The IRC called on the international community to work with Afghanistan to improve its testing capacity and to increase direct support for front-line responders like the IRC.