Afghanistan Peace Campaign
By TOLOnews.com
27 May 2020

Trump criticized his predecessor President Barack Obama for announcing a timed withdrawal from Afghanistan in the past. 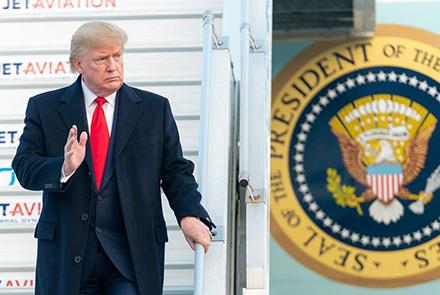 US President Donald Trump on Wednesday repeated that he wanted to bring American troops back from Afghanistan, saying the US is acting as a police force and it is time for Afghans to police their country.

“We are acting as a police force, not the fighting force that we are, in Afghanistan. After 19 years, it is time for them to police their own Country. Bring our soldiers back home but closely watch what is going on and strike with a thunder-like never before, if necessary!” tweeted Trump.

Earlier, news agencies reported that Trump on Tuesday at a White House news conference renewed his desire for a full military withdrawal from Afghanistan.

“We’re there 19 years and, yeah, I think that’s enough… We can always go back if we want to,” said Trump.

The troop pullout discussion references the peace deal that the US signed with the Taliban on February 29, an agreement that also set a deadline for the US troops to leave the country.

But the Afghan government, which considers the US its strategic partner, has reacted with dismay to the troop withdrawal as the country still grapples with a Taliban insurgency.

During his election campaign in 2016, Trump promised to end the wars like the one in Afghanistan.

Trump has also criticized his predecessor President Barack Obama for announcing a timed withdrawal from Afghanistan in the past.

And in a 2017 speech, Trump said “how counterproductive it is for the United States to announce in advance the dates we intend to begin or end military options,” adding that “America’s enemies must never know our plans or believe they can wait us out.”

Trump reiterated the call for a US pullout at the same time the Afghan government and the Taliban are passing through a three-day ceasefire which ended last night. But until now the Taliban has not said whether they are extending the ceasefire.

Trump on Afghanistan: Bring Back Troops, But Closely Watch05.27.2020