The agreement says that the council will provide guidance to the negotiation team. 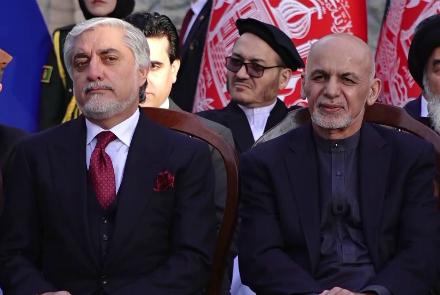 TOLOnews has obtained a copy of the political agreement between President Ashraf Ghani and his political opponent Abdullah Abdullah that outlines the structure of a future government in which each side will have a 50 percent share.

The five-page agreement— originally in Dari– describes the government role given to Abdullah Abdullah and specifies his authorities and privileges and areas where his team will participate.

The two sides have agreed in principle on the plan, according to Abdullah and Ghani’s aides, but discussions are still underway about details.

Based on the agreement, the High Council of Government will be established to ensure political consensus in the country. Political leaders and national figures will be members.

This council, according to the agreement, will consult with the president on important national matters.

Another aspect of the plan is the establishment of the High Council of National Reconciliation led by Abdullah Abdullah, from which he can issue executive orders. The council will have five deputies from the two teams.

The council members will be selected by the director in consultation with the president, political leaders, people from the two sides, speakers of the parliament houses and the civil society and elites, according to the agreement.

Based on the agreement, Abdullah will lead the peace process, the meetings of the reconciliation council, and he will appoint its members and employees, including the employees of the State Ministry for Peace Affairs.

The council itself has been given the authority to specify, approve and lead all affairs related to the peace process, the agreement says. The decisions and enactments at the council will be made by a majority of votes of its members.

The decisions and enactments made by the High Council of National Reconciliation are final and they should be implemented, the agreement said.

According to the agreement, Abdullah will lead the council and he will receive the same security and protocol privileges as the number two person in the country.

The council will be an independent budgetary unit, based on the agreement, and will be funded by the government, but it will also receive financial support from the international community.

The head of the council, Abdullah Abdullah, will have the full authority over the spending of the budget of the reconciliation council and the expenses are not exempted from assessment, the agreement says.

The High Council of National Reconciliation will have two sections: (1) The general assembly, and (2) the leadership committee.

The agreement also mentions reforms in the electoral process, which include changing the system of the elections, the holding of provincial council and district council elections, the use of the biometric system, and amending the law on political parties in accordance with electoral reforms.

The agreement says a five-member monitoring team will be established to oversee the implementation of the agreement and prevent any violations.

If the team finds a violation, it will solve it through understanding and will report its findings to the president and the head of the reconciliation council.

A key part of the agreement is the participation of Abdullah’s team in the government. This matter has been one of the main topics of the discussions between the two sides.

Based on the agreement, Abdullah will have the authority to appoint 50 percent of the cabinet, including key ministries.

Sources said the ministries of Interior Affairs; Justice, Labor and Social Affairs; Refugees and Repatriation; Transportation; Economy; Agriculture, Irrigation and Livestock; Higher Education; Borders and Tribal Affairs; Industry and Commerce; and the Ministry of Telecommunication and Information Technology have been offered to Abdullah by President Ghani.

The agreement says that the rank of marshal should be given to the former vice president Gen. Abdul Rashid Dostum. He should also be given the membership of the High Council of Government and the National Security Council, said the plan.

Part of the agreement mentions that those political leaders who have been engaged in the peace process should be appreciated.

These leaders include former High Peace Council (HPC) chief and former president Burhanuddin Rabbani who was killed in a suicide attack in  2011, his son, Salahuddin Rabbani, who also served as HPC chief and foreign affairs minister, the former head of HPC, Sayed Ahmad Gailani, who died in  2017, and the incumbent HPC chief Mohammad Karim Khalili.