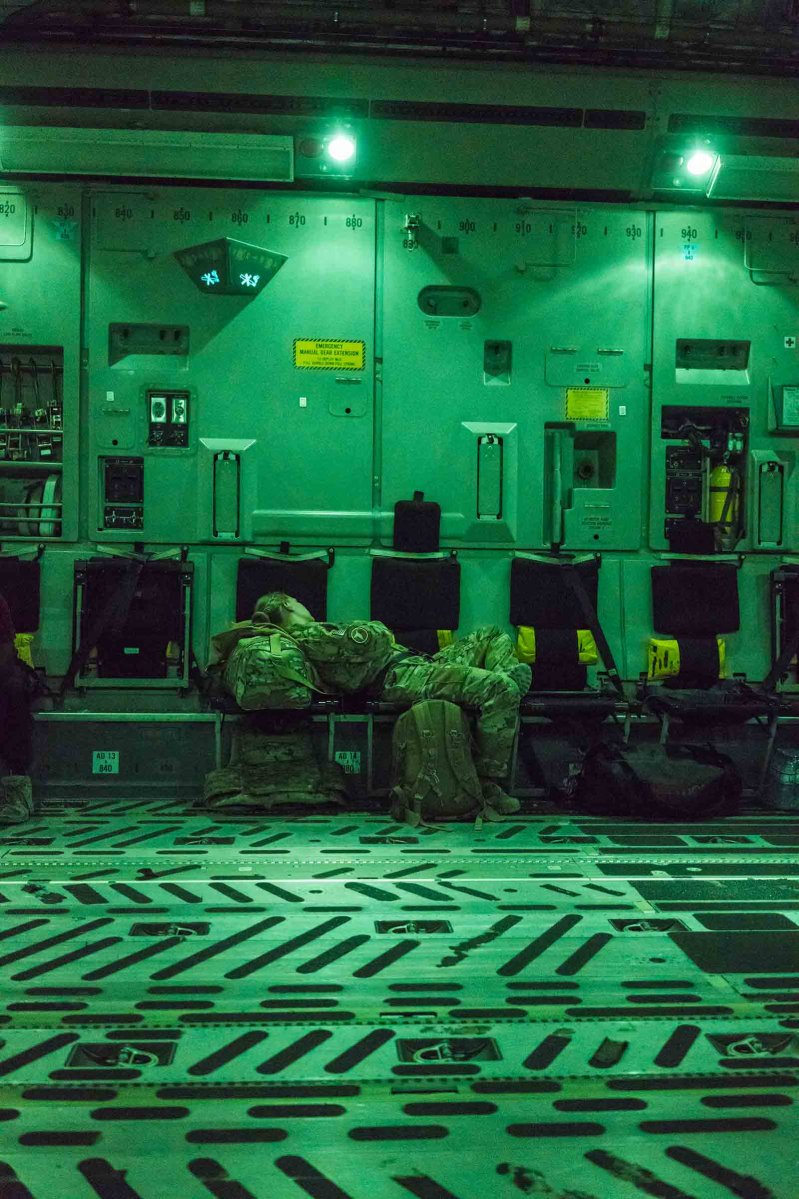 A U.S. soldier rests on a flight to Kabul in August 2018. The war in Afghanistan is nearly two decades old. Emanuele Satolli for TIME

President Donald Trump had barely been in Afghanistan for a few hours on Nov. 28 when he made three bold declarations. In coming days, Trump said, the Taliban would stop their attacks and stalled peace talks would resume. But, he also told Afghan officials, the U.S. would keep a small number of troops there indefinitely. “They didn’t want to do a cease-fire, but now they do want to do a cease-fire,” Trump said of the Taliban, during a press conference at Bagram Airfield, north of Kabul, roughly 13 hours after flying from Maryland under the cover of darkness for a surprise Thanksgiving visit to the troops. “It will probably work out that way.”

Unfortunately, that’s not how the Taliban see it. The combination of notions Trump floated is a deal breaker for the militants who have been waging war against the Afghan government and foreign troops for nearly two decades. For starters, the Taliban aren’t laying down their weapons before brokering a full withdrawal of U.S. troops. Leaving any American forces in the country is also likely to stymie talks. “The cease-fire will start only after the signing of the peace agreement,” Taliban spokesman Suhail Shaheen tells TIME.

Any compromise must come from Trump, Shaheen adds, since it was he who canceled a planned peace summit at Camp David, via Twitter on Sept. 7. “In our view, the ball is in the U.S. court,” Shaheen says. “They called off the talks. It is up to them to come to the table if they want peaceful solution of the issue.”

So it’s hard to say who Trump was trying to reach with these new messages. In their delivery, he muddied his 2019 State of the Union pledge to end U.S. involvement in “endless wars.” And aides have surely told him that even though he did give the Taliban half of what they want—a public declaration from the U.S. President that he is serious about resuming talks—negotiations are unlikely to move forward under the conditions he set out. That leaves any hope of a peace deal where it was when Trump came to office: nowhere. As talks drag on, the delays can be measured in lives: in the first nine months of 2019, there were more than 8,200 civilian casualties, according to the U.N.

This mess now falls to U.S. peace envoy Ambassador Zalmay Khalilzad to clean up. Khalilzad, who was in Kabul on Dec. 4, must try to talk the Taliban into reducing attacks on U.S. and Afghan forces without calling it a cease-fire, while convincing Trump and the Afghan government that he’s achieved a cease-fire in all but name.

His job will be complicated by Trump’s alleged assurances to Afghan President Ashraf Ghani. Current and former Afghan officials briefed on the leaders’ conversations during Trump’s visit said Trump promised the Afghan government a greater say in future discussions, an idea the Taliban have long rejected. They also said Trump told the Afghan government he’d maintain some U.S. troop presence in the country, echoing comments he made earlier this year. “We’re going to keep a presence there. We’re reducing that presence very substantially, and we’re going to always have a presence,” Trump told Fox News Radio in August.

Trump abruptly walked away from that deal in a blistering September tweetstorm, just after canceling the secret summit at Camp David. The plan had been to try to broker an agreement between the militants and Afghan President Ghani, who’d accepted the invitation, in the style of the 1978 Camp David accords. Trump blamed the talks’ collapse on a Taliban bombing in Kabul that killed 12 people, including an American soldier, but Shaheen said it was the Taliban that balked at traveling to Washington without having a deal and cease-fire already in place.

One thing to emerge in the post-Thanksgiving haze is that Trump’s position toward the Taliban seems to have hardened, perhaps because of criticism from retired generals and lawmakers like Senator Lindsey Graham. “I don’t know why in the world we would restart talks with the Taliban unless they renounce violence,” Graham tells TIME.

The Taliban delegation in Doha has always insisted there is no cease-fire without a deal, and no deal without a full withdrawal. But they too are also facing a weary and impatient fighting force that was disappointed by the derailing of talks in September.

U.S. negotiators are seeking a “reduction in violence” against both U.S. and Afghan forces, a senior administration official told TIME on Thursday, conceding that push goes beyond what the Taliban agreed to before talks fell apart. “The reduction in violence discussion has definitely widened and it does involve the Afghans as well,” she said, speaking anonymously to discuss the sensitive negotiations.

She also confirmed Afghan officials’ assertions that Trump wants the Afghan government to be more involved in the peace process, but would not comment directly on whether Trump had pledged to keep U.S. troops in Afghanistan. “We are constantly evaluating our troop force levels,” she said. “President Trump has been clear (that) he would like to bring it down…but he’s also not going to do something that is going to threaten the American people or the American homeland.” When asked if the Taliban would accept keeping a small number of U.S. forces in the country, she replied: “We think the Taliban also would like a peace agreement.”

So would most people in Afghanistan. “One of the real frustrations in the last year is that the talks have been going on, but for many in the countryside, it feels like the fighting has escalated,” says Kate Clark, co-director of the Kabul-based Afghanistan Analysts Network. “From the Taliban or the Afghan government and U.S. side … from airstrikes and night raids. And there’s no accountability for any of it.”