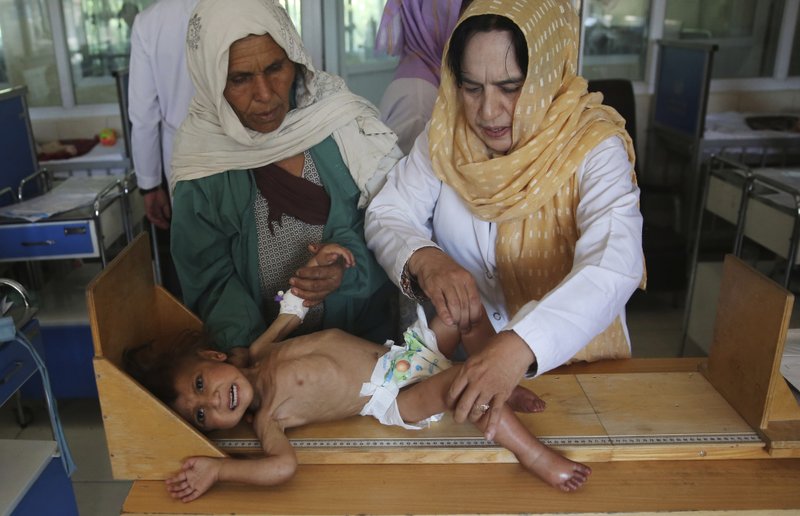 In this Aug. 21, 2019, photo, a nurse, right, checks the height of a malnourished girl, Humaira, in a ward at Indira Gandhi hospital in Kabul, Afghanistan. Whimpering and badly malnourished, the children are among the most vulnerable in a country that remains one of the poorest in the world. Now an expected United States-Taliban agreement to end nearly 18 years of fighting raises questions about whether humanitarian aid will decline as foreign troops withdraw. (AP Photo/Rafiq Maqbool)

JEBUL SIRAJ, Afghanistan (AP) — The children will inherit any peace that comes to Afghanistan, if only they can live to see it.

Whimpering and badly malnourished, they are among the most vulnerable in a country that remains one of the poorest in the world. Now an expected United States-Taliban agreement to end nearly 18 years of fighting raises questions about whether the foreign aid largely propping up the country will drop as troops withdraw.

Much depends on the Taliban, who have indicated they want that aid to continue even as they call for armed “invaders” to leave. But if the insurgent group that already controls roughly half of Afghanistan tries to assert a harsh form of Islamic law across the country or continues its attacks, some donors could walk away.

The urgency of aid is seen in Jebul Siraj, a mountainside community north of the capital, Kabul, where a burqa-clad woman held a gaunt, startled-looking boy named Abdullah, just 7 months old. Days ago, he was at an emergency ward. Now he sipped curiously at a supplement as part of a new nutrition monitoring program at a clinic in Parwan province supported by the United Nations children’s agency. Mothers and children lined up outside. 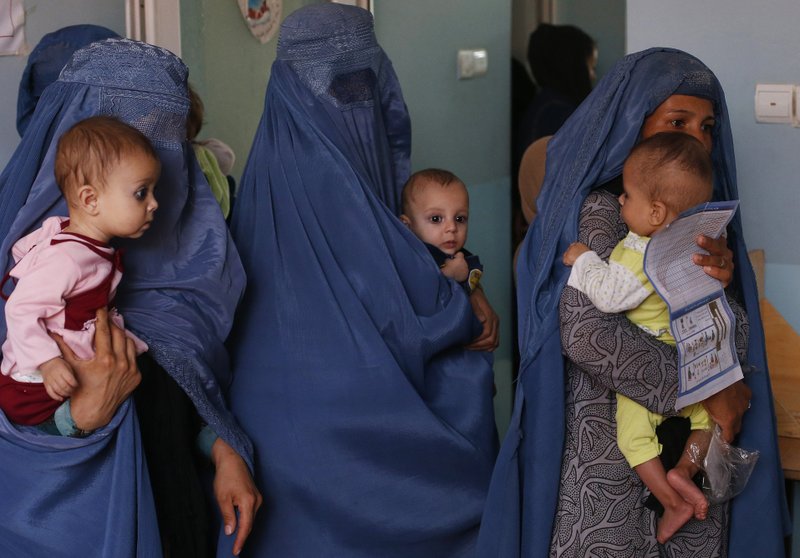 Some 2 million children in Afghanistan face acute malnutrition, according to UNICEF, about 600,000 of them so severely malnourished that without urgent treatment they could die.

The hospital in nearby Charikar city treats more than 1,000 children a month for malnutrition and the problem is growing, nurse Fariba Hashimi said.

“It’s mostly an economic issue, for mothers as well,” she said. “They can’t breastfeed because they don’t have enough income to feed themselves.” Aid has dropped in recent years, with supplemental biscuits and wheat flour that was once provided for patients now unavailable.

Health care and other basic services are precarious in a country where the World Bank says grants finance some 75% of total public expenditures. This year it warned against the dire consequences of “any rapid decline in international aid flows.”

Afghanistan has been the largest single recipient of American aid since the U.S.-led invasion to oust the Taliban in 2001, but despite billions of dollars in assistance more than half of its people still live in poverty. Much of the aid has gone to security efforts, and frustrated Afghans assert that untold amounts have been lost in corruption and mismanagement.

U.S. aid to the country was cut in half in 2014, the year that U.S. and NATO forces formally ended their combat mission. About 20,000 forces remain, largely to train and support Afghan counterparts.

If a U.S.-Taliban agreement on ending America’s longest war brings badly needed peace, Afghanistan could see an increase in aid, said Alex Thier, who once directed assistance for the country with the U.S. Agency for International Development.

But if the peace process drags out or fails, that could “depress enthusiasm for giving,” he warned after a visit to Kabul this month. Some donors could be reluctant to fund a government in which the Taliban wield power and don’t respect the rights of women and others.

The Taliban have indicated they want international aid to continue, and understanding how to keep it flowing is part of talks with the U.S., Thier said, citing what he has heard from diplomats, Taliban proxies and people who met with Taliban leaders in intra-Afghan dialogues in Moscow and Qatar this year. 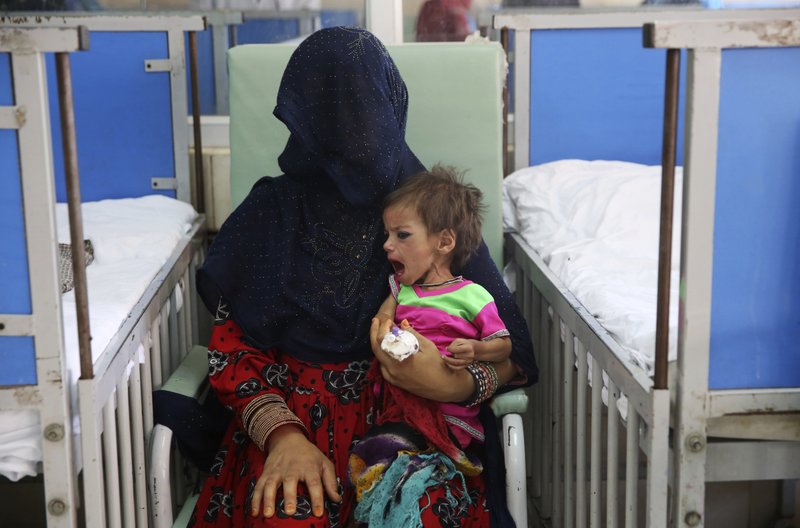 A woman holds her malnourished girl in a ward at the Indira Gandhi hospital in Kabul, Afghanistan. (AP Photo/Rafiq Maqbool)

“Part of the Taliban motivation in the peace process is, they clearly want to avoid being a pariah state as before,” he said. But no one knows what they will give up to keep receiving support.

The local U.N. humanitarian coordinator, Toby Lanzer, who has spoken with “all of the authorities across Afghanistan,” said he believes aid won’t drop, calling the country’s case so compelling that efforts must continue, whatever happens. He has spoken with the United States and other “particularly generous” countries and believes donors are in Afghanistan for the long haul.

Asked how the interest of President Donald Trump’s administration in cutting overall foreign aid complicates the situation, Lanzer paused for more than 10 seconds before saying that “when it comes to a strategic location such as Afghanistan, everybody has to chip in, and everybody has been chipping in. And I would very much count on the continued generosity of the people of the United States of America, of institutions such as USAID, to stay the course.”

Next year could be Afghanistan’s most pivotal, he said, as the latest round of international aid pledges ends. He expects another pledging conference in 2020 for “the new government, whichever government that might be.”

At the Indira Gandhi children’s hospital in Kabul, which treats 70 to 80 malnourished children a month, director Dr. Mohammad Bashir Qurishi worried about how doctors will be paid and medicine purchased if aid follows troops out of the country. 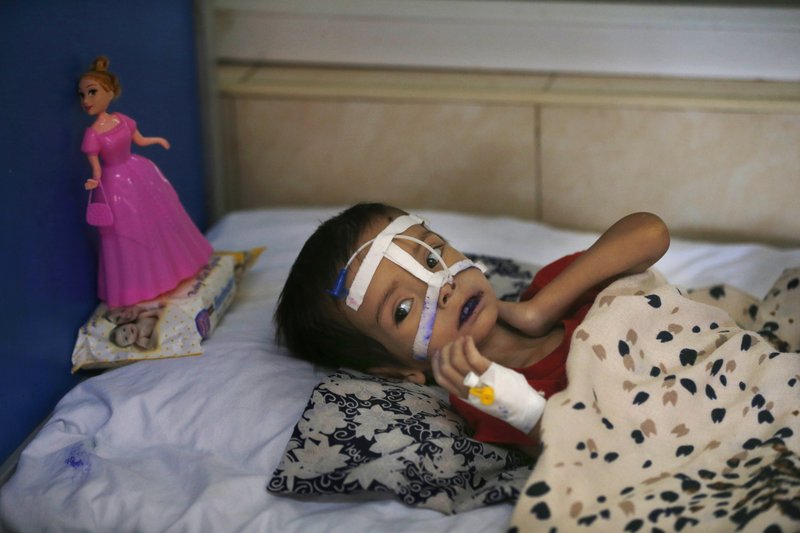 A malnourished Afghan girl at a ward at the Indira Gandhi hospital in Kabul. (AP Photo/Rafiq Maqbool)

Everyone is afraid of losing the progress made since 2001, he said, as the U.S. and the Taliban negotiate the country’s future while excluding the Afghan government.

“If Trump wants to take us back to Stone Age time, then it is their policy,” he said.

In the ward for malnourished children, decorated with aid stickers from UNICEF and Japan, a nurse pointed out fragile toddlers. One 2-year-old, her face covered in tape to keep a nasal feeding tube in place, breathed with discomfort, a Barbie-like doll next to her on her pillow.

Nearby was Bibi Warai. Her 2-year-old granddaughter had just died at home outside the eastern city of Jalalabad, and now the girl’s 3-year-old sister, Humaira, was undergoing treatment. After their hours-long journey to the capital she wished for more such wards so that all Afghans can reach help in time. 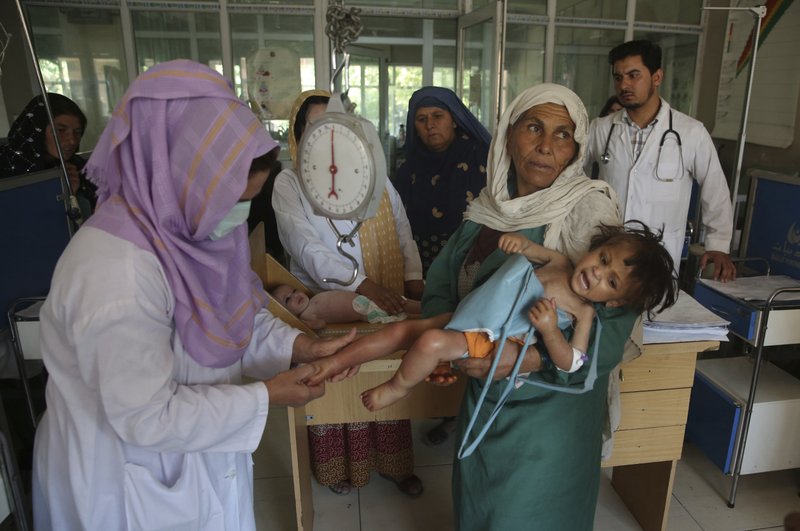 “My son told me, ’How can you leave us at this time of mourning?”″ she said. “I told him, ‘I can’t stay, I have to take my child for treatment.’ Maybe God will help us, and she will survive.”

She placed her hand gently on the girl’s forehead and began to cry.

As troops prepare to leave Afghanistan, will aid stream out?08.28.2019