How the Taliban Infiltrated a Vital Afghan Army Base — Again

By Rod Nordland and Thomas Gibbons-Neff 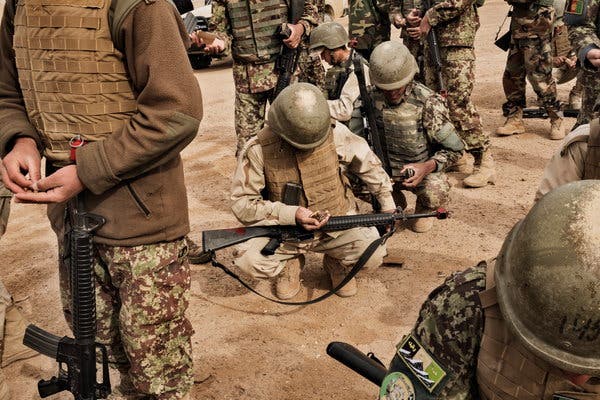 Afghan soldiers being trained by Americans at Camp Bastion in Helmand Province in 2016. Credit Adam Ferguson for The New York Times

KABUL, Afghanistan — Some Taliban fighters hid inside a sewage tanker truck, hoping the smelly interior would prevent a close inspection — as it did. They rode it into one of the most important military bases in Afghanistan and then hid in an empty warehouse.

Other insurgents used ladders to climb the fences, scaling two sets of them, to cross a no man’s land that had once been protected by motion detectors and infrared cameras but now had only sleepy guards in watchtowers.

The infiltrators had friends in high places, as well, according to Afghan and American military officials: an Afghan lieutenant colonel and a sergeant major who made sure they knew where to go, and where to hide on the sprawling base.

The ensuing attack on Camp Bastion in Helmand Province, on March 1, was not one of the country’s deadliest, but it may well have been its most embarrassing. It was the third time the Taliban had infiltrated that base, the headquarters for the Afghan Army’s 215th Corps.

Before the assault was over, 23 Afghan soldiers and base workers would be dead, and the American military would once again have to come to the rescue of a base it had long since handed over to the Afghans. An American airstrike finally ended the attack after 20 hours of fighting.

Outnumbered 200 to one, the Taliban once again delivered an object lesson that demonstrated the weaknesses of the Afghan military, in the heart of a base responsible for the most active front in the Afghan war.

The first to die was the Afghan garrison commandant, Sgt. Sarajuddin Saraj, who owed his important position to political connections, according to the former garrison commandant. The estimated 20 to 30 Taliban infiltrators had positioned themselves in trenches in the middle of the base, and as they began firing, Sergeant Saraj jumped in a vehicle with his driver and raced straight into an ambush. Both were killed.

The insurgents took Afghan soldiers hostage and made them act as guides to new targets. The militants headed straight for the corps’ command center in the center of the base, where American advisers were on duty, according to a reconstruction of the attack provided by two American officials and confirmed by Afghan officials.

At the same time, the insurgents launched a separate attack on an American Marine base, Camp Nolay in Sangin District, 40 miles away, as an apparent diversion, although the Marines quickly repelled it.

At Camp Bastion, American Special Operations troops helped rally the Afghan military into a defense. American Marines opened fire from watchtowers around their own small base within the camp, designed to protect the estimated 300 troops from insider attacks. Infrared cameras fed them real-time information as the insurgents advanced from the west toward the heart of Camp Bastion.

Officials offered no explanation why the array of American technology at their disposal — from overhead drones to radio intercepts — had not warned of the infiltration in the first place. But bad weather did hamper any air support in the initial hours of the attack.

Even so, it would be well into the day before the attack was subdued, when an American airstrike destroyed the warehouse where the Taliban attackers had taken refuge.

Earlier Marine rotations through Camp Bastion had warned that the lightly defended Regional Training Center on the western side of the base was a likely route of attack, but apparently no action had been taken. The suspected insiders, American officials said, were in charge of that part of the base.

Camp Bastion used to be the headquarters for the fight against the Taliban in southwestern Afghanistan’s Helmand Province, an area where more American, British and Afghan soldiers have been killed than anywhere else in the country.

Originally built by the British, it was their biggest overseas base since World War II. Immediately adjacent was Camp Leatherneck, a sprawling base built up by American Marines. At its height, the whole base complex included housing and facilities for up to 30,000 troops, 600 flights a day using a runway two miles long that could handle aircraft that could fly anywhere in the world, base amenities like air-conditioned gyms, a Pizza Hut, a mineral water bottling plant and state of the art defenses around the perimeter of the 12-square-mile facility.

Nevertheless, it was infiltrated twice under the watch of international forces.

In March 2012, a suicide bomber came barreling through the perimeter fence in an S.U.V., barely missing American and British generals who managed to jump out of the way. Those two were waiting for another V.I.P.: Defense Secretary Leon Panetta, whose plane landed just minutes after the attack.

A few months after that, in September 2012, insurgents cut through the wire fence on the eastern perimeter of the base and destroyed six American Marine AV-8B Harrier jump jets and badly damaged two others, basically wiping out an entire squadron. They also killed the squadron’s commanding officer, Lt. Col. Christopher “Otis” K. Raible, and a Marine sergeant, Bradley W. Atwell. Two Marine generals were fired after a Pentagon investigation.

The Afghans renamed it Camp Shorab after the Americans completely pulled out and handed it over in 2014, but many of them continued to use the old name. They managed for several years to prevent Taliban intrusions, even as much of the sprawling base went unused, with vacant buildings and tent camps. The high tech perimeter defenses, nmaintained, fell by the wayside.

“Even if the attackers got help from inside the base, the garrison was sufficient to stop them if they were doing their duty properly,” said Col. Nasimullah Alishanghai, the previous commander.

Camp intrusions were hardly the only problem for the Afghan Army’s 215th Corps. American advisers have long complained that Afghan soldiers were loath to leave the base, even as the Taliban expanded their reach throughout Helmand Province.

Corruption dogged the corps. In 2015, its commander was fired after accusations that he had thousands of ghost soldiers on his payroll — men who were paid but either did not exist or did not show up for duty, including some who were dead.

Late that year a new corps commander was appointed, and the Americans came back, a few hundred Army trainers at first, plus a contingent of Special Operations troops, and later an estimated 300 Marines.

The new Afghan corps commander, Gen. Moein Faqir, boasted that he had solved the ghost soldiers problem, and the limited number of Americans who moved back onto Camp Bastion early in 2016 gave him high marks.

By early the next year, though, General Faqir was under arrest, accused of theft from his men’s food and munitions budgets and other forms of corruption. Even as Afghan officials were complaining about how the Taliban were increasingly outfitted with black-market night-vision equipment, dozens of sets of night-vision goggles and laser sights went missing from General Faqir’s division.

General Faqir, arrested in March 2017, is now serving a five-year prison sentence, according to Jamshid Rasool, the spokesman for the attorney general.

The former garrison commandant, Colonel Alishanghai, who retired from his post six months ago after running Camp Bastion for four years, attack free, said what happened was a classic outcome of corruption.

His replacement, Sergeant Saraj, was unqualified for the responsibility, he said. “He was a sergeant and they promoted him to garrison commander because he knew high-ranking officials,” Colonel Alishanghai said.

The acting Afghan secretary of defense, Atiqullah Khalid, visited the camp a week later, and in a speech vowed to prosecute those responsible for allowing the attack to take place.

“There is no doubt there was neglect of duty,” he said. “Regardless of rank or position, we will prosecute those responsible and prevent such incidents in the future.” Afghan officials say the defense secretary left the camp with at least five suspects in his custody.

The result of the attack went beyond the 23 dead. Because of the concerns that the insurgents had insider assistance, the American military suspended its advising and training of Afghan forces at the base for weeks, shifting to phone calls instead of any in-person meetings with their Afghan counterparts, according to two military officials.

Atiqullah Amerkhel, a military analyst and former general, said that the sense of siege had kept Afghan forces focused on staying defensive, to their detriment. “Our military officials there do not have the upper hand; they mostly only wait to respond to the Taliban,” he said.

The stakes are high. “Camp Bastion is the largest and most important base in Afghanistan,” said Ataullah Afghan, head of the Helmand provincial council. “If we secure Helmand, it means we secure Afghanistan. If we lose it, we lose Afghanistan.”

How the Taliban Infiltrated a Vital Afghan Army Base — Again05.15.2019