The militants’ new strategy is to out-govern the U.S.-backed administration in Kabul—and it’s working.

In many ways, Charkh seems like a typical rural Afghan district. With little development or industry to speak of, its population of 48,000 ekes out a living mostly from farming. Poverty is common; those who can find better jobs elsewhere leave and send money back to support their families. But a closer look at Charkh reveals a divergence from what one may expect of an average Afghan district. Administrators there are widely seen as fair and honest, making them outliers in a country consistently ranked among the world’s most corrupt. Locals say there is remarkably little crime. Disputes among neighbors or families are rare, and when they arise, the district governor or judge quickly settles them. A health official regularly monitors clinics to make sure that doctors and nurses are present and that medicines are stocked. Across the district’s schools, government teachers actually show up, and student attendance is high—an anomaly in a state system where absenteeism is rife.

On paper, Charkh’s surprising success could be interpreted as evidence of how the U.S.-backed administration of President Ashraf Ghani has finally extended a semblance of good governance beyond the capital of Kabul. But in fact the Afghan government deserves no credit for Charkh; the district is currently governed by the Taliban. The de facto local authorities, from the mayor to the town’s only judge, come from the Taliban’s ranks, and ordinary bureaucrats, such as teachers and health officials, have been vetted and selected by the insurgency—even though Kabul still pays their salaries.

Despite the near doubling of U.S. troop levels and a spike in airstrikes over the past year, the Taliban retain significant influence in vast swaths of rural Afghanistan and are working assiduously to out-govern Ghani’s internationally recognized National Unity Government. The idea that the Taliban are now striving to provide good governance might strain credulity, given the draconian cruelty of their rule from 1996 to 2001. During those years, they banned women from school and work and executed young lovers in sports stadiums. Since the group’s overthrow in 2001, its brutal attacks have killed tens of thousands of Afghans. As recently as 2009, the Taliban were still killing teachers, burning schools, and attacking aid workers.

Today, however, the Taliban are seeking to present themselves as a legitimate political movement able to administer services and govern the country. As U.S. and Afghan forces pull back to protect major cities—as part of Washington’s new strategy—the Taliban are filling the vacuum. They are no longer just a shadowy insurgency; they are a government in waiting. 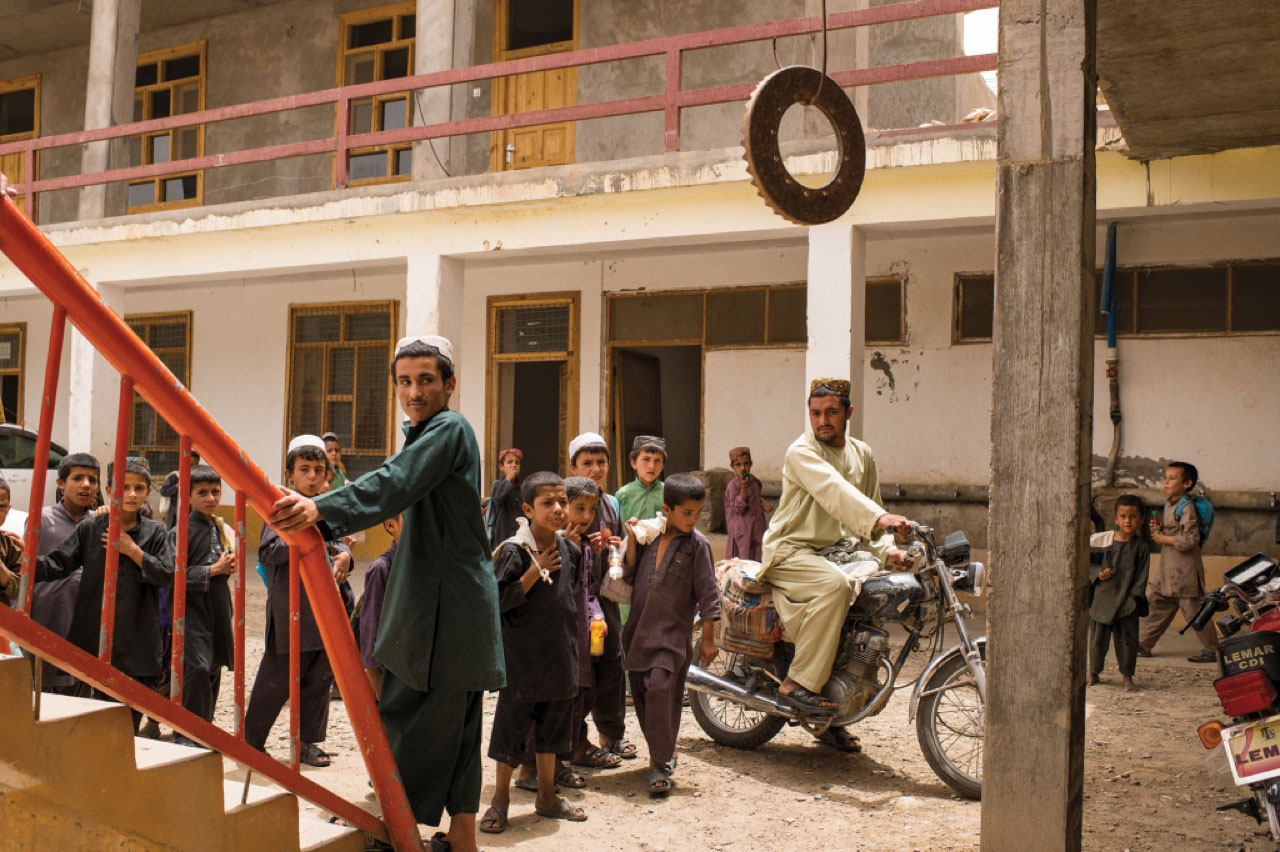 Students in the courtyard at a school in Shin Kalay, a village in Helmand’s Nad Ali district, on May 14.

To understand the Taliban’s puzzling turnaround, one has to return to 2014. The withdrawal of tens of thousands of international troops that year presented the group’s leaders with both risks and opportunities. They had, after all, faced similar circumstances before: In 1996, during the height of the civil war, they’d taken advantage of the virtual absence of any form of central authority to sweep to power. But this time, the Taliban leadership realized that instead of attacking government schools and aid projects, it could gain much more by co-opting them. In doing so, it could take credit for providing services and win over the local population.

What began with a gradual recognition that unbridled violence would hurt the Taliban’s battle for popular support grew into a sophisticated governance structure, including the management of schools, clinics, courts, tax collection, and more. Local Taliban members began to strike unofficial cease-fires with Afghan soldiers to de-escalate the conflict. Government soldiers would man checkpoints until the evening, after which the Taliban would assume those positions until dawn. This shift in Taliban strategy created a relatively peaceful—if uneasy—coexistence between the insurgency and the government in areas that had previously been among the country’s most volatile. “They were cruel before, but now they are trying to show a different face,” said a former Taliban commander in the northern province of Kunduz. “They have to show they can do everything the government can—but better.”

Taliban fighters and officials credit Mullah Akhtar Mohammad Mansour for this transformation. Mansour nimbly led the movement through a series of pivotal moments: the so-called surge that began in late 2009, when Washington sent in 33,000 more troops to turn around the failing war effort; Mullah Mohammad Omar’s death in 2013, which Mansour, as his deputy, strategically concealed for two years; the 2014 drawdown; and the resignation of several key deputies once Mansour formally assumed the role of emir—the Taliban’s leader—in 2015.

“Mansour totally changed our thinking: about governing, about peace, about everything,” one Taliban official in the southern province of Helmand said. Mansour transformed the Taliban from a scrappy insurgency to a shadow state. He consolidated the military and financial wings of the Taliban, attempting to move away from a system of patronage to one focused on building institutions. Mansour created a Taliban commission to investigate civilian casualties. He appointed Tajiks and Uzbeks to the Taliban’s rahbari shura, or leadership council, broadening the movement beyond its Pashtun base. 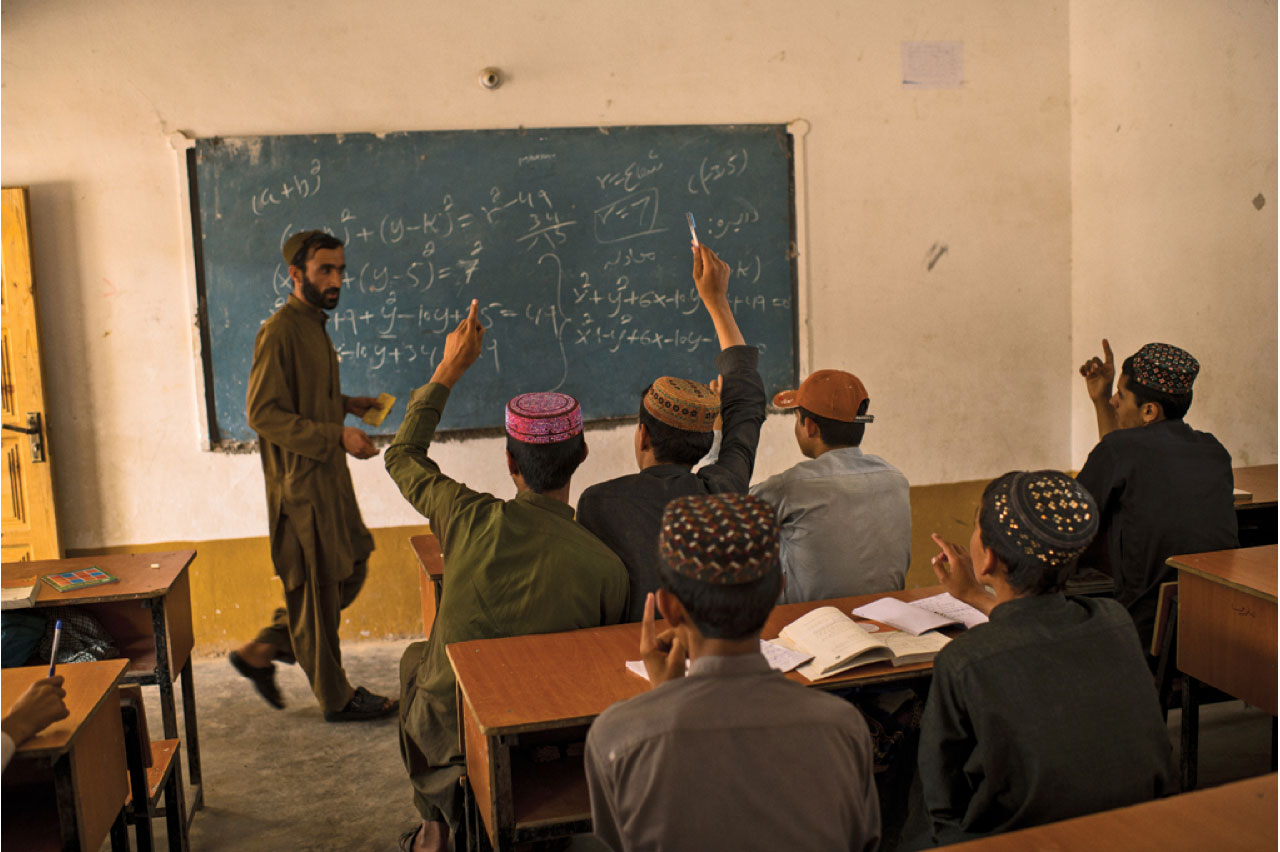 Students in class at a school in Shin Kalay on May 14.

Mansour was preparing the movement for life after war. Rather than seeking outright victory, he was positioning the Taliban for a power-sharing deal. Mansour was a staunch advocate for the opening of a Taliban office in Qatar in 2013, cautiously steering the group toward a greater openness to talks.

In May 2016, the United States killed Mansour in a drone strike, but his vision lives on. Its primary advantage is the way it allows the Taliban to spread their influence without incurring the high body counts and low morale that result from pitched battles. When the Taliban have tried to seize district centers and major cities—including the northern city of Kunduz in 2015 and 2016—they have been swiftly pushed back by airstrikes and internationally backed ground offensives. So while they continue to periodically attack cities, as they did this past spring in the western province of Farah and in August in the eastern province of Ghazni, the Taliban now devote fewer resources to these operations and use them more to embarrass the Kabul government than to capture territory.

The Taliban’s new focus is on extending their control in a more subtle way. By relying on coercion and their reputation for providing fair (if harsh) justice, they have gained new footholds in village after village. As their influence grows in a given town, the Taliban gradually impose their rules on civilian life and recruit a force of civil servants—ranging from electricity bill collectors to health inspectors—to enforce them. The level of their presence varies from place to place, but even in cities ostensibly under government control, such as Kunduz and Lashkar Gah, the Taliban now tax businesses and adjudicate disputes. 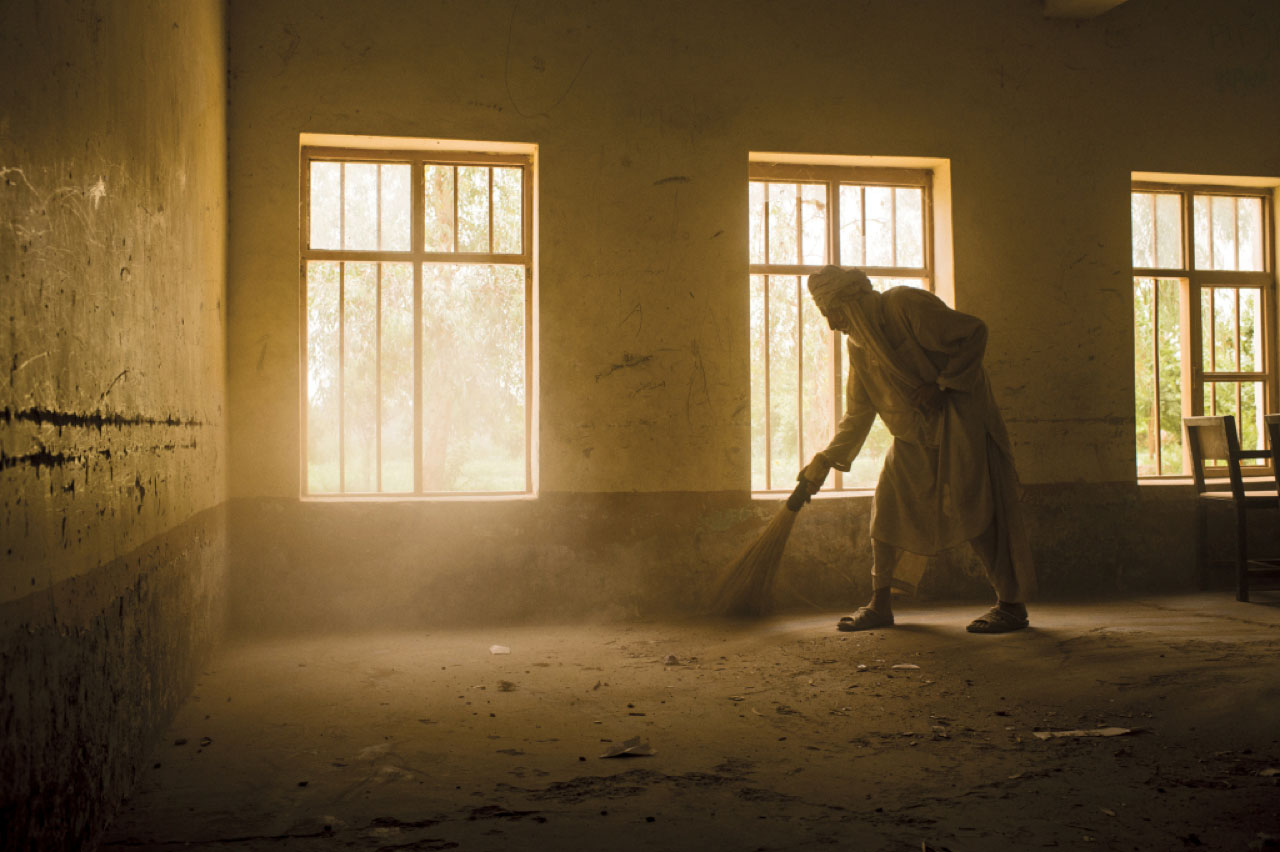 Khan Akha sweeps a classroom in the main building of Khalaj High School in Nawa-i-Barakzai on May 13.

Unlike the Islamic State, which attempted to create new parallel infrastructure in the territory it seized, the Taliban prefer to co-opt existing government services and aid projects. In an October 2017 interview via WhatsApp, the Taliban spokesman Zabihullah Mujahid explained the seeming contradiction involved in working with a state his organization was simultaneously fighting: “This is about meeting people’s needs. It’s not a part of the war.”

But it is, of course. The Taliban have realized that there’s no need to attack symbols of the state if you can instead capture their resources and redirect them to your aims. This process has been made much easier by most Afghans’ frustration with the widespread corruption that has crippled public services and made finding work so difficult. An estimated 80 percent of state teachers must pay bribes to get their positions, according to an audit Kabul released late last year. “The government could do nothing in the past 10 years,” said Jamal, a former teacher at the boys high school in Charkh’s district center. “The Taliban solved our problems right away.”

Jamal, whose name has been changed for his protection, was just a teenager when the insurgency came to his village in Logar province around 2007 and he fled to escape the fighting. But he struggled to find a job elsewhere, and he decided to return after his family assured him that security had improved since the Taliban had taken control. His old school principal recommended him to the group, which checked out his background. Once they were satisfied that he was not a spy for the government, local Taliban officials indicated their approval to village elders acting as intermediaries between the Taliban and government officials. The elders informed Education Ministry officials, who then appointed him to his post.